When I lived in Cheyenne, Wyoming – I became obsessed with trees.  Why?  Because there are very few trees in Cheyenne, Wyoming.  There is mostly Pronghorn Sheep poop and tumbleweeds. The tumbleweeds are huge and they trip and skip across the desolate prairie bolstered by the incessant gusts of gale force winds.  The people who grew up in Wyoming say they don’t really like large patches of trees or forests, because they can’t see where they are going. That’s weird to me.

When I moved to the Central Valley of California, I became obsessed with water and rain.  I love rain, always have. My family is British – it is in my genes. I am a gardener, I love flowers and plants – which need rain. I flourished in Seattle, where I went to Grad school.  I am much happier on a dreary, soggy day, than a sunny, clear day.  When I moved to California – I did my research on earthquake fault lines, making sure the place we were moving to was not directly over one.  But – I had no idea it only rained 4 months out of the year, usually from November to March.  If I had known I would have to live with sunny, blue-sky days for most of the year – I am not sure I would have moved here.

I tell you all of this for a reason – I have become obsessed with water, and more specifically with the health of the San Joaquin River.  Every day when I come home from work, I cross over a bridge above the skeleton of the San Joaquin River.  When I first came here it was nothing more than a trickle of water through an otherwise dry river bed.  And while this might not cause of any of you great consternation, it does me, because I am told the San Joaquin River was once a mighty river, that started in the mountains at the Thousand Island Lake, up in the Sierra Nevada, travelled down through the Sacramento-San Joaquin Delta and along to Suisan Bay, San Francisco Bay and the Pacific Ocean. It still runs in places, but other sections have dried to dust.

I am told the river was so large at the point where I cross over my bridge, on the way home from work, the water extended from bluff to bluff and a ferry travelled from one side to the other.  When I first moved here, one couldn’t even sail a paper boat successfully for any distance, because all the water was gone. It is very difficult to live in such a dusty, arid environment, where the sound of rain is nothing more than a distant memory. 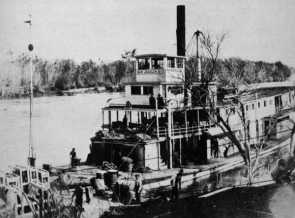 In 1942 they opened the Friant Dam, and killed the river.  They did that to divert water to the San Joaquin Valley so the farmers could irrigate their crops.  In doing so they decimated 2 established Salmon Runs.  The farmers became richer and the river faded away.  On a side note – it is said it takes one gallon of water to grow one almond.  It takes even more water to grow a walnut (one source cites it takes 4.9 gallons to grow a walnut). In Silicon Valley – the brilliant techies are the ridiculously wealthy people, here in the Valley, the nut farmers are the ridiculously wealthy. 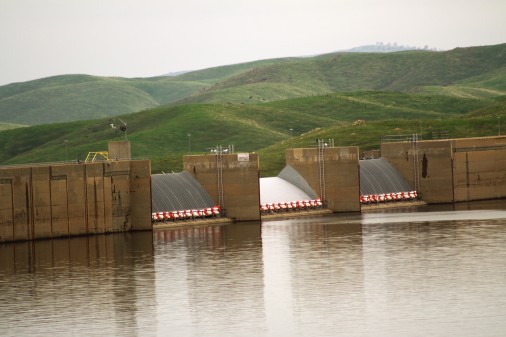 The Friant Dam – on Millerton Lake (north side of dam)

Creepy remnants of abandoned bridge on south side of dam. 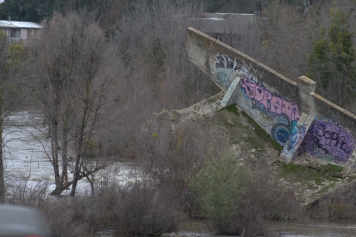 Creepy remnants of abandoned bridge on south side of dam

Creepy remnants of abandoned bridge used as a canvas for graffiti artists on south side of dam.

And then the drought hit and things went from grim to downright awful.  Towns in the Valley ran out of water, people weren’t able to bathe their children and were subsisting on bottled water trucked in (see Class-Based Drought).  Here in the Valley, the rich farmers still had access to the water (they have Water Rights Lawyers), but the rest of us have scrabbled and fought for our share.

Then, about 2 years ago – something happened.  The Environmentalists must have won a battle, and some water was released back into the San Joaquin River from the Friant Dam.  My dry river bed, which I have been watching closely for 10 years now, had more water in it, enough water where I have seen people swimming in the part where I drive over, every day. I was so excited.  Every day, on my way home I would check as I drove across the bridge.  It filled my heart with delight.  Granted it isn’t much water, but it is water.

So here is the even better part of the story.  It has rained and rained and rained here.  California has been hit with one huge storm after another.  The media is calling these storms “Drought Busting Storms”.  Our catchment basins around town are brimming with water.  The ducks and geese are joyfully paddling about.  Last summer they were trudging through slimy, algae covered mud in the catchment basins, because there was no water at all.  It is said that the snow pack is at an all-time high, with some places receiving 12 feet of snow.  We depend on the melt off from the snow pack for our water. And the San Joaquin River is running, and bubbling and filling parts of the river bed I have never seen filled. And my part of the river, the part that I look at every day, is amazing – it runs happily along, and there is so much water, there are caps of white water forming.

Yesterday I decided to go take some pictures of the river, and it filled my heart with joy to see how alive it was.  It looked like a real river, and as I stood on the bluff, looking at the river below, I could see the possibility of its majestic beauty returning as it meandered through the valley below me. 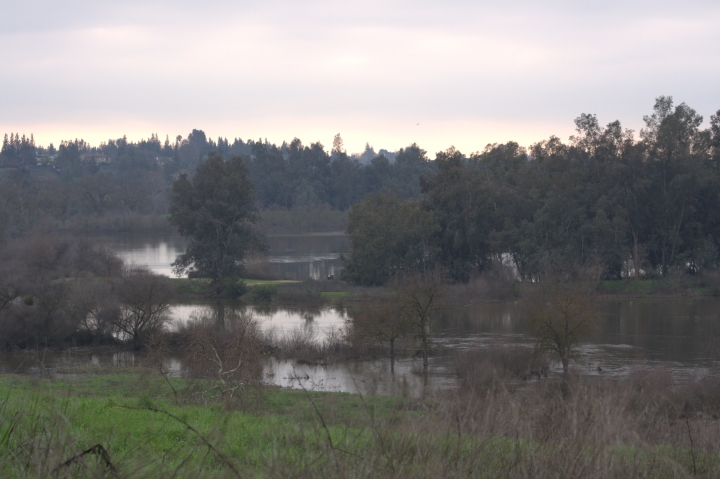 I am hoping this isn’t the end of the rainy season.  I keep checking the Weather Channel app on my phone, to see when the next storm might come through.  Around here, the rainy season can end abruptly – and then we will not see any significant rain until next November and my river will recede and fade again.  I hope that doesn’t happen.  I am keeping my fingers crossed.