Here we are.  At the dreaded Q post for the 2018 A-Z Blogging Challenge.  This is the post that I struggle with every year, this is the post where I start to lose steam, and my drive to get the remaining posts for the blogging challenge just sputters out.

Quadrivial – having or consisting of four roads meeting at a point, or (of roads or ways) going in four directions.

I ran out of gas. Being the poor planner that I am, I had thought I would have enough gas to make it to the next town.  The low gas warning light had come on miles ago, but I had hoped the clouds would break apart, and a thin sliver of golden light would shine down upon me, and steer me in the right direction, push my little car farther.  I wondered, why I always functioned under this umbrella of magical thinking, why I always thought things would work out in the end, when historically they hardly ever did.

Apparently, my magical thinking, and the absence of that guiding light, had failed me once again. Here I was, at the intersection, where four rural roads met.  A quadrivial. It was a word that showed up one day on my “Word of the Day” app ages ago, before things had gone amuck, a word that I thought I would never have the opportunity to use. At the time, I thought to myself, what a nice word that was – quadrivial, but how would one use it, without sounding like a pompous ass.  A word that I wished now, given the circumstances I found myself in, I hadn’t needed to use. 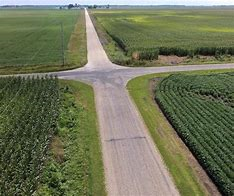 After sitting in my car for sometime, I finally got out.  I walked to the very center of the intersection, and stood there.  I turned and looked down one road, and then turned again, and again, and finally again looking down each road.  Not a soul in sight, not a house, nothing.  Nothing as far as the eye could see.  Not even a traffic sign. Even the powers that be, hadn’t thought this road deserved a sign. Just long roads that narrowed as they went towards the horizon, getting thinner and thinner, until I couldn’t see them anymore.  It just became a blur of green pastures, and blue skies.

And the silence.  No sounds, just the roaring of my blood in my ears, the beat of my heart, pounding.  Now I wish I had stayed on that highway, taken my chances, seen if I could have made it to that next town, to the next gas station conveniently located at near the highway off ramp.  But I didn’t.  Instead, thinking I was much more clever, than all the other drivers on the highway, who were all heading out of town as well, away from the danger, the violence, the fires, the looting – yeah, I thought I was the smart one – but here I stood, alone.  A solitary soul. A poor planning, stupid, solitary soul, who knew words that nobody ever used. Alone at the intersection of four roads, lonely, stranded, without gas, without food, without guidance – at the quadrivial of my life – or what was left of it.

Categories: A - Z Challenge - The WOrld According to S.D., Little Stories