Year and years ago, back when I was a sophomore in college, attending a school in Iowa – my Mum sent me on a marine biology course.  Our school’s semesters were set up in a 4-1-4 calendar, so we did regular classwork in the Fall and in the Spring, but in January we took one intensive class, and devoted the whole of January to that particular subject. At the time, I was a Biology major, taking courses in Natural History, Ecology and that kind of stuff.  My Mum kindly signed me up for a Marine Biology course, which took place on San Salvador Island in the Bahamas.  A month in the Bahamas, away from the cold, snowy, blustery January days of the Midwest – what a dream. 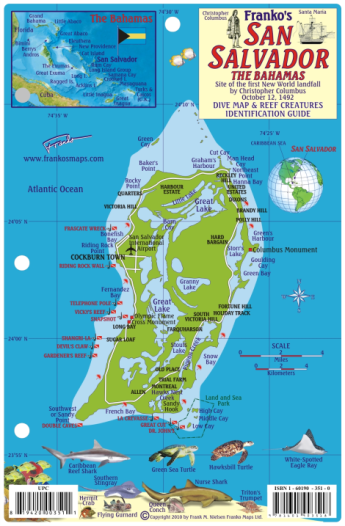 It truly was a dream.  We spent our days snorkeling amongst the reefs, laying gridlines, doing little research projects, and enjoying the weather.   This one particular day, my friends and I had been out snorkeling.  I can’t remember what our objective had been for the day, but we had been paired up into teams, as always. Everyone had snorkeling buddies, which is an absolute must when snorkeling, in case someone gets into trouble.

My buddy and I had been trolling around a reef, examining things and doing whatever it was we were supposed to be doing.  It was a beautiful day, the skies and the ocean were brilliantly blue.  The sun shot through the water, creating mosaics of gold patterns on the sand and the coral. The water was warm.  It was really most enjoyable.  After along say of snorkeling, my snorkeling buddy and I had decided we should turn back, go towards the beach, to meet up with our classmates.

As we were swimming back, sloshing along on the surface of the water, I noticed some movement beneath us.  Large movement.  Not cute little fish movement.  I looked down into the water to see what horrible sea monster might be down on the floor of the ocean.  We were all a little nervous, as just the day before, one of our classmates had had a near miss with a Lamprey Eel, and this made us all aware of the fact, out here in the ocean, we were simply part of the food chain, and nothing more.

Tapping my friend on the shoulder, we came up to the surface and I asked him if he had noticed any movement.  He said No, but we put our masks back into the water, and shooting through the darkness of the ocean, coming straight for us, was the largest Barracuda I had ever seen (not that I have had lots of encounters with Barracudas).  He was huge, maybe 5-6 feet in length.  And he was most definitely on a mission. My snorkeling “buddy”, pushed me in front of him, I suppose so I would be the first one to be eaten.

Needless to say, I started swimming as fast I as I could, away from the oncoming silvery cylinder of meanness that was barreling down upon me.  My friend must have somehow escaped unnoticed, because he was nowhere to be seen.  It was just me and the Barracuda.  I swam as fast as I could, away from the land, and the Barracuda, with his rows of really pointy teeth, just kept following me, circling around and around.  Several times I tried to head back towards the land, but when I did, he came closer and closer, so close, I could see his how pointy his rows of teeth were.

We had been warned about Barracudas, how with those pointy rows of teeth, they don’t bite, but they tear and grind the flesh of their prey.  I didn’t want to have the flesh off my legs ground and torn, and so I swam and swam, frantically checking to see if he had given up casing me, and gone back to his territory.  But the fish was relentless, and I honestly think, if I hadn’t been on the Swim Team back then, there is no way I would have made it out of that situation unscathed.

That Barracuda pushed me out to sea.  The coral beds were long gone, and the only thing I could see, was the bottom of the sandy ocean floor.  So deep was the water, the sun wasn’t able to send its rays to the bottom. There were shadows, and I was sure, there were other things looming in the protective darkness, ready to pounce out and eat me. 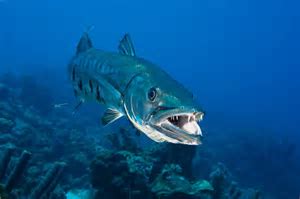 He chased me out about two miles or so.  And then, as if he had had enough of his little game, of messing with me, just swung around and headed in the direction of the reefs.  I treaded water for ages, in the middle of the ocean, with the land so desperately far away, checking to see if he would return. When I was sure he wouldn’t come back, I started the long trek back to land, giving wide berth to the reef where I had first encountered that enormous Barracuda.

Categories: A - Z Challenge - The WOrld According to S.D., Fish, Little Stories