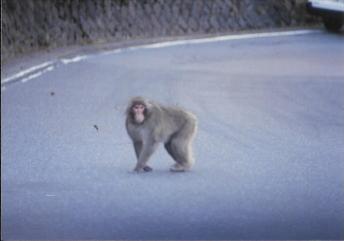 I have been totally remiss in completing my Five Photo Five Series Challenge.  I was supposed to present five photos accompanied with paragraphs, little stories to explain the photograph, one photo daily for five consecutive days.  This challenge has taken me about 10 days to do.  My friend Mark Bialczak nominated me for this challenge.  This is Day 5 (but really Day 10).

When I think of Snow Monkeys (Japanese Macaque), I think of those fluffy monkeys sitting in steaming pools surrounded by snow-covered boulders.  But, I can tell you that is not the case at all.  See that guy in the photo at the top of the post, he is not one of those monkeys.  He is not a fluffy Snow Monkey, with rosy cheeks, lolling about in hot spring pools.

This monkey, we first noticed on a mountain road up near Nikko, in Japan. He was hanging out with his cronies on the side of the road.  They were kind of perched up on a wall at the edge of the mountain road.  We slowed down to take photographs.  My side of the car was facing the group of monkeys.  I had my window down, in order to take the photographs.  As I was snapping several pictures, one monkey separated from the group and in a flash had jumped from the wall and instantly was right next to the door of the car.  Up close, it turns out these monkeys have enormous teeth.  I was petrified, frozen, with my camera right in front of my face, but my eyes were on that monkey with the big teeth.  We stared each other down.  I was too scared to try and roll the window up, for fear a movement from me, might be seen as an aggressive gesture (no electric windows, it was a crank handle) and could possibly elicit an even scarier move from the monkey.

We sat staring at each other for at least 30 seconds, his little glinty eyes kept flitting back and forth like he was trying to psych me out.  With one fluid movement, the monkey reached into the car through the window, his little fingers wrapped around a box of Chocolate Pop-Tarts, and he snatched the box out of the window, along with the opened package of Pop-Tarts also on the dash.  He doesn’t jump back to his wall to show his buddies his loot, oh no.  To make matters worse he jumped on to the hood of the car, and deliberately and with a glimmer of a smirk on his face, urinated all over our windshield.  I don’t know how much exposure the average person has to Snow Monkey urine, but it is quite pungent.  I suspect the urine may have seeped down into the cooling system of the car, because that entire following summer we were gently reminded of the Snow Monkey who stole our chocolate Pop-Tarts.

Not so nice Snow Monkey

So the bottom line to this story, is don’t be fooled by a fluffy Snow Monkey, because they are really Pop-Tart stealing, hood urinating beasts, not to be trusted.

Here’s how this challenge works: You post a photo each day for five consecutive days and attach a story to the photo. It can be fiction or non-fiction, a poem or a short paragraph that shares your insight or inspiration of or from the image.  I am supposed to nominate someone to participate, but I know it is the weekend, and people have things to do.  If someone would like to take part in this challenge, I will extend a nomination to them.